35 mph – the estimated speed at which the bow section hit the sea bottom (56 km/h), travelling straight and relatively smoothly due to its hydrodynamic nose.

50 mph – the estimated speed at which the stern section hit the bottom (80 km/h), spiralling as it landed.

How deep is the Titanic wreck?

400 – the water pressure at the ocean floor where the Titanic came to rest, measured in atmospheres. As the stern section spiralled down this water pressure would have torn away sections of the hull and stripped much of the interior. 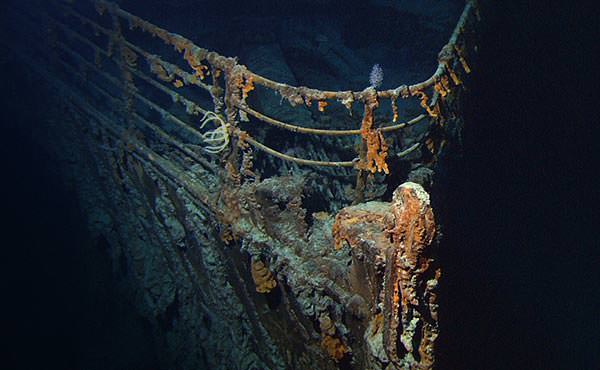 Above: The bow of the Titanic wreck underwater, photographed in 2004 (Image credit: NOAA/Institute for Exploration/University of Rhode Island)

2 – the number of sections that the ship split into, the bow and stern sections dividing just forward of the third funnel.

If you look in your dictionary you will find: Titans – A race of people vainly striving to overcome the forces of nature. Could anything be more unfortunate than such a name, anything more significant? -Arthur Rostron, Captain of the rescue ship Carpathia, in ‘Home From The Sea’, 1931

40 feet – the height that the front of the bow section sits above the surface of the ocean floor (12 metres).

60 feet – the distance into the sea bed that the bow penetrated (18 metres).

20 tons – the estimated weight of the bow section.

Whilst the bow section of the wreckage lies on the bottom looking relatively intact and recognisable, the stern section is in much worse condition, being broken, twisted and disfigured. This is because of how the Titanic sank.

392 feet – the length of the stern section of the wreck, the second largest piece of wreckage (120 metres).

1,000 – the approximate number of acres of sea bed over which Titanic wreckage is strewn (a debris field of around 3 by 5 miles).

When was the Titanic found?

The wreck of the Titanic was finally located in 1985, on 01 September to be precise. She was discovered by an American-French team led by Robert Ballard and Jean-Louis Michel, and using the remote-controlled deep-sea submersible ‘Argo’.

73 – the number of years after the Titanic sank before the wreck site was discovered (more precisely, 73, years, 4 months, 17 days).

28 July 2001 – the date on which New York couple David Liebowitz and Kimberley Miller married aboard the wreckage of the Titanic, using one of the submersibles used in the making of the Titanic movie released in 1997.

Above: Footage of the Titanic wreck captured in 2004 by the National Oceanic and Atmospheric Administration (NOAA) Titanic Expedition.

6,000 – the approximate number of artefacts that have been recovered from the shipwreck to date.

2010 – the year in which The Titanic Mapping Project was launched, a multi-million pound undertaking by RMS Titanic Inc, the legal stewards of the Titanic wreck, and involving a team of leading scientists, archaeologists, oceanographers and imaging experts.

60% – the approximate area of the wreck site that had previously been mapped.

15 miles² – the area of ocean floor mapped by the new expedition, recording artefacts both large and small.

5 – the number of distinct areas that the debris field has been divided into for mapping purposes (north, south, east, west and central).

37 terabytes – the amount of data captured of the debris field of the wreck.

5 – the number of years over which the Mapping Project data has been reviewed, resulting in the National Geographic documentary Drain The Titanic.

Where is the Titanic?

370 miles – the approximate distance (600 km) at which the wreck of the Titanic lies south-southeast of the coast of Newfoundland, Canada.

14 April 2012 – 100 years after she sank, the date on which the Titanic became a UNESCO underwater cultural heritage site.

600 lbs – the amount of metal (270 kg) Titanic was estimated to be losing every day (through the corrosive effects of ‘rusticles’, iron-eating microbes) according to Canadian microbiologist D. Roy Cullimore, who visited the wreck in 1998.

200 lbs – the amount of metal (90 kg) that Cullimore had estimated Titanic to be losing daily just two years earlier.

50 years – the period within which “hull and structure…may collapse to the ocean floor”, estimated by the National Oceanic and Atmospheric Administration in 2001.