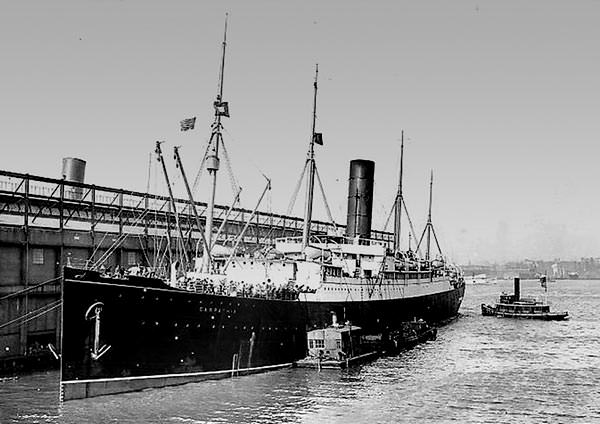 Above: The Carpathia photographed at Pier 54 in New York City on either 18 or 19 April 1912, following the rescue of Titanic survivors.

1 – the number of radio operators employed on the rescue vessel Carpathia.

00.00 – midnight, the regulation time at which the radio operator was due to finish work.

00.25 am – the time at which he actually started to finish duty, unlacing his boots at Titanic’s SOS call arrived; if the signal had arrived just a few minutes later Carpathia would not have come to the rescue, and so many more of the survivors would surely have perished.

14 knots – the maximum speed at which Carpathia was designed to travel.

17 knots – the typical speed achieved on the way to Titanic’s assistance.

6 – the number of icebergs Carpathia passed as she raced through the icefield.

3.5 hours – the time it took Carpathia to arrive.

04.00 am – the time at which Carpathia arrived at the scene of the sinking.

Devoutly thankful I was that the long race was over…but with that feeling was the veritable ache which the now certain knowledge of the liner’s loss brought. No sign of her – and below was the first boat containing survivors. -Arthur Rostron, Captain of the Carpathia

700 – the number of passengers and crew aboard Carpathia.

706 – the number of people rescued by Carpathia.

As they awoke to the scene of the tragedy, the passengers aboard Carpathia selflessly assisted the survivors of the Titanic, comforting the rescued, giving them food and drink, and even their spare clothes. Passengers and crew then gave up their cabins to accommodate the survivors on the trip to New York.

25 – the number of icebergs over 200 feet in height counted from aboard Carpathia as daylight broke, plus dozens more sized between 50 and 150 feet. 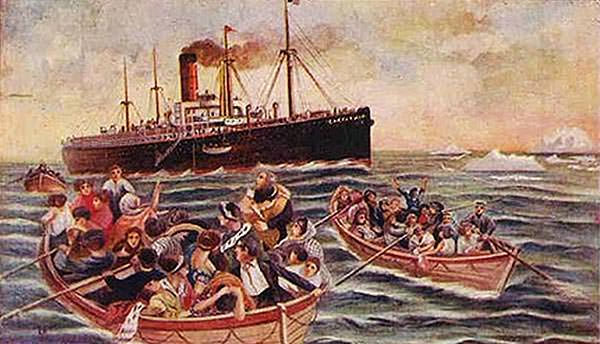 Above: The Titanic rescue ship Carpathia, with survivors approaching in lifeboats, as depicted on a postcard published in 1912.

1 – the number of bodies seen in the water by Captain Rostron.

3 – the number of dead lifted from the Titanic’s lifeboats.

1 – the number who perished en route to New York. All 4 bodies were buried at sea on the afternoon of Monday 15th April. 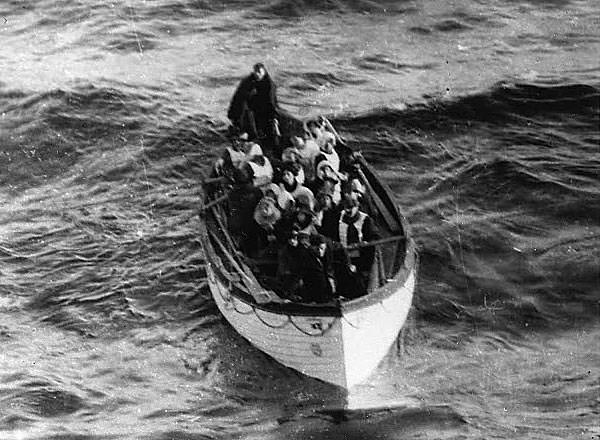 08.00 am – the time the Californian arrived at the scene of the sinking, at which point Carpathia set off to deliver the survivors to New York.

0 – the number of survivors found by the Californian.

56 miles – the distance that the Carpathia had to travel to circumnavigate the ice-field.

4 hours – the approximate time that diversion took to complete, before Carpathia could finally set sail for New York.

3 days – the time it took to deliver the rescued survivors to the safety of the harbour in New York. 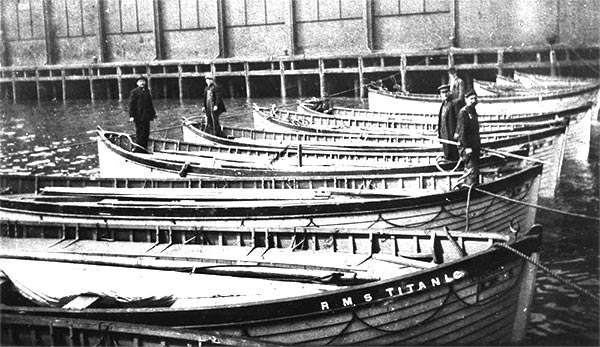 Above: Lifeboats deposited at the White Star Line berth in New York by Carpathia, the ship that rescued Titanic survivors.

13 – the number of lifeboats that Carpathia lifted from the water and transported to New York; this was all she could carry and so 7 empty lifeboats were left in the Atlantic.

59 – the pier at which Carpathia dropped off the Titanic’s emptied lifeboats, back into the possession of the White Star Line.

54 – the pier in New York City at which First and Second Class survivors disembarked; thousands of friends, relatives and sympathisers greeted their arrival.

3 hours – the approximate length of time that third class survivors had to stay aboard Carpathia, only allowed to leave around midnight, once immigration inspectors had completed the task of processing their entry papers. 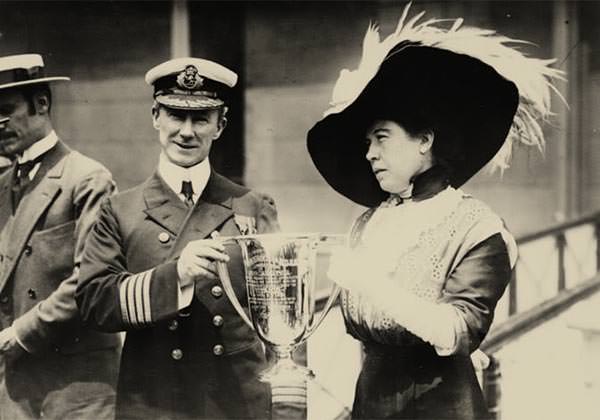 Above: Margaret Molly Brown presents the trophy cup award to Captain Arthur Rostron of Carpathia, 29 May 1912.

1 – the number of Carpathia’s original passengers who opted to leave the ship at New York, before the ship once again set off on her original voyage to Fiume (now Rijeka, Croatia).

In recognition of his bravery Captain Rostron was knighted by King George V and received both the US Congressional Medal of Honor and the American Cross of Honor. On 29 May 1912 he was also presented with a silver trophy, on behalf of the survivors of the Titanic, by Margaret “Molly” Brown, one of the people he rescued.

In September 1915 Rostron took command of the Mauritania, captaining her for 11 years, taking in duties during the First World War and at one time setting a new record for the fastest Atlantic crossing (the ‘Blue Riband’).

17 July 1918 – the date that SS Carpathia met a sad demise. After going on to serve in the First World War she was torpedoed by a German U-boat, sinking off the south Irish coast.

215 – the number of people who survived the sinking of Carpathia.

5 – the number of victims of the German U-boat attack.

06 September 1999 – the date on which the wreck of Carpathia was found.

600 feet – the depth at which Carpathia lies.

185 miles – the distance from Lands End, Cornwall, England, that the wreck of Carpathia was found.

Found the story of the Carpathia inspiring? Why not explore more facts about the Titanic wreck, the complete timeline of events, and about the recovery of the bodies.