As the largest moveable man-man object of its day, Titanic construction took a little over two years to complete, involving thousands of men and a cost equivalent to over one hundred million in modern day terms. Built at the Harland and Wolff shipyard in Belfast, alongside sister ship Olympic, building Titanic did not go without problems. Read on to discover fascinating facts and figures about the build. 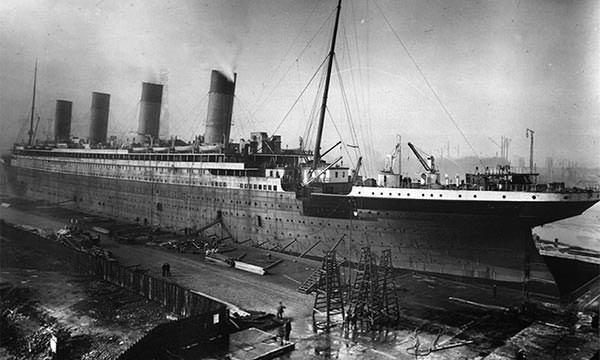 Above: Titanic under construction.

31 March 1909 – the date on which the keel was laid down and the construction of the Titanic commenced.

3 months – the number of months after the keel of Olympic was laid down that Titanic’s keel was laid.

31 May 1911 – the date on which the Titanic launched, entering the Victoria Channel in Belfast Lough from a slipway at the Queen’s Yard of the Harland & Wolff shipyard.

26 months – the length of time it took to build the RMS Titanic, from keel to launch.

How much did the Titanic cost to build?

3 – the number of the slipway on which Titanic was built.

228 feet – the height (69 metres) of the gantry built over the RMS Titanic and her sister ship Olympic. Fittingly, it was the largest gantry in the world at that time.

14,000 – the number of men typically employed at the Harland & Wolff shipyard.

15,000 – the approximate number of men employed at the peak of the building work.

How many people built the Titanic?

3,000 – the approximate number of Harland & Wolff shipbuilders who constructed the Titanic.

20% – the percentage of the total Harland & Wolff workforce this number represented.

How many rivets were used on the Titanic?

4 – the number of men in a riveting crew.

200 – the number of rivets that a riveting crew could complete per day (assuming dry weather conditions).

15,000 – the number of days work this rate of riveting would have represented for a single crew.

3 months – the intended gap between the completion of Olympic and Titanic. This gap widened as more men were allocated to building Olympic in order to meet her planned launch date.

8 – the number of construction workers killed during the build, from keel laying to launch.

246 – the number of injuries recorded during the build.

There was an unwritten expectation in shipyards at the time of ‘one death for every £100,000 spent’, so at a build cost of £1.5, the Titanic’s toll was less than the 15 deaths that might have been expected. 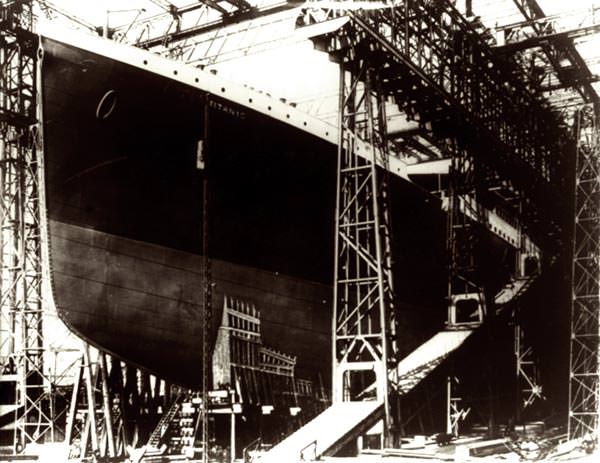 Above: Building the Titanic at the Harland & Wolff shipyard in Belfast.

20 – the number of horses needed to transport the main anchor.

Why was the Titanic built?

Titanic and her sister ships Olympic and Britannic were built to compete with the ocean liners Lusitania and Mauretania. Owned by rivals Cunard, the Lusitania was renowned for her luxury, whilst the Mauretania held the Blue Riband, the unofficial record for the fastest crossing of the Atlantic (a record which remained unbeaten until 1929). White Star Line had decided not to attempt to compete on speed but rather to build larger, more reliable and more luxurious ships than their rivals.

100 feet – the approximate increase in length of Olympic and Titanic over Lusitania and Mauretania.

49 – the average hours worked per week at the shipyard.

£2 – the weekly wage of a Harland & Wolff construction worker.

6 – the number of days worked each week (Saturday was a shorter day, ending early afternoon, and Sundays were not worked).

06.00 am – the time by which yard managers were expected to be on site.

If you’ve found these facts on the build interesting, you might also wish to read about the shipyard where Titanic was built and about her ill-fated maiden voyage to New York.