14 – the number of years prior to the disaster that US author Morgan Robertson wrote the novel ‘Futility’, in which an ocean liner named Titan strikes an iceberg on her maiden voyage.

2 – the number of White Star Line passengers killed during that 10 year period.

4 – the number of days into the Titanic maiden voyage when the collision occurred. 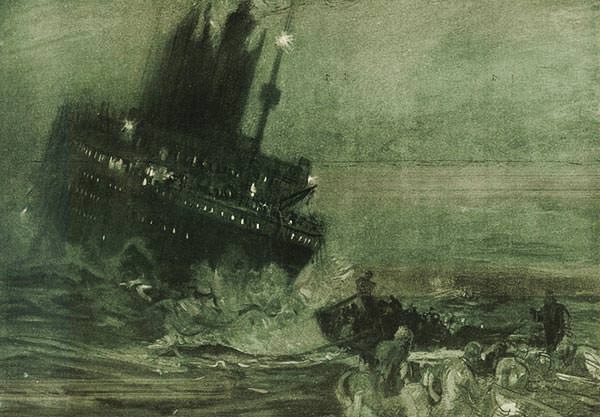 Above: Sinking of the Titanic drawn by Henry Reuterdahl, 1912.

6 – the number of ice warnings the Titanic received before the collision.

22.5 – the ship’s speed in knots whilst traveling amid iceberg laden waters, just .5 knots below the top speed of 23 knots.

30 seconds – the length of time between the first sighting of the iceberg to the crash. As the ‘berg came into view, lookout Frederick Fleet called the bridge to announce “Iceberg, right ahead!”

4 – the number of forward compartments that could flood without risk of the Titanic sinking.

6 – the number of forward compartments that were ruptured in the collision.

From the very day that she was designed she was almost doomed…this [the use of iron rivets] was almost the Achilles heel of the Titanic. -Paul Louden-Brown, White Star Line Archivist

160 minutes – the time it took the Titanic to sink after hitting the iceberg (2 hours and 40 minutes). 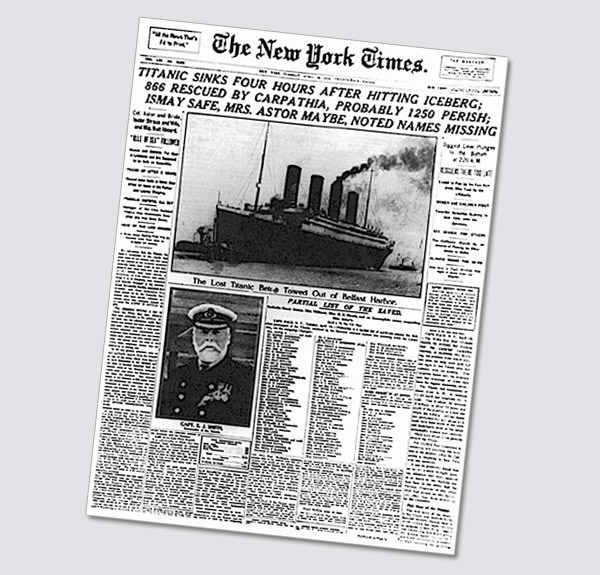 Above: Newspaper report on the sinking of the Titanic, 1912.

60 minutes – the delay between the collision and the first Titanic lifeboats launching.

220 to 245 feet – the estimated length of the gash caused by the collision (minimum to maximum length).

12 – the actual estimated size of the opening, in cubic feet.

The Titanic, like her sister ship Olympic, had not been fitted with any form of public address system.

400 tons – the approximate amount of water the Titanic took on per minute after the collision.

58 miles – distance of the rescue vessel Carpathia, at the time of the distress call.

38,000 tons – the approximate volume of water that filled the bow of the Titanic. This volume of water lifted the ship’s stern out of the water, before it finally broke away, splitting just in front of the third funnel.

The Titanic is not the worst maritime disaster in history. On 30 January 1945, in the final year of the Second World War, the German flagship MV Wilhelm Gustloff was torpedoed off the coast of Poland with the loss of more than 9,000 people, many of whom were refugees.

11° – the estimated angle at which the stern is believed to have broken away when Titanic sank.

5-10 minutes – the approximate time it took the two major sections of the Titanic – bow and stern – to reach the sea bottom.

Striking the water was like a thousand knives being driven into one’s body. The temperature was 28 degrees, four degrees below freezing. -Charles Lightoller, Titanic Second Officer

56 km/h – the estimated speed that the bow section was travelling when it hit the bottom (35 mph).

80 km/h – the estimated speed that the stern section travelled on its way down (50 mph), spiralling as it descended and with sections breaking off from the ship, resulting in much more visible damage to this section than the bow.

I heard a graphic account of how the Titanic up-ended herself and remained poised like some colossal nightmare of a fish, her tail high in the air, her nose deep in the water, until she dived finally from human sight. -Arthur Rostron, Captain of the rescue ship Carpathia (in ‘Home From The Sea’, 1931)

30 knots – the estimated speed (around 35 mph / 56 km/h) at which the bow of the Titanic would have hit the ocean floor, taking many poor victims with her.

20° – the angle at which the bow hit the bottom as Titanic sank.

How Cold Was The Water?

15-45 minutes – the typical maximum life expectancy of the Titanic victims in the water.

5mm – the minimum amount of movement that could occur between the steel plates of the hull before the wrought iron rivets used to join the curved sections would fail (see Did You Know? below).

Due to access difficulties in using a pneumatic riveting machine to construct the curved sections of the hull, these steel plates needed to be joined together using wrought iron rivets rather than the stronger steel rivets that were used elsewhere (iron rivets were easier to hammer into place).

As shipbuilding moved to using steel instead of iron plates in the construction of hulls, this practice was widespread. However, forensic tests undertaken in 1996 by Johns Hopkins University in Baltimore revealed that, in the case of the Titanic, these iron rivets would fail with just a 5mm movement between the steel plates they were meant to secure. 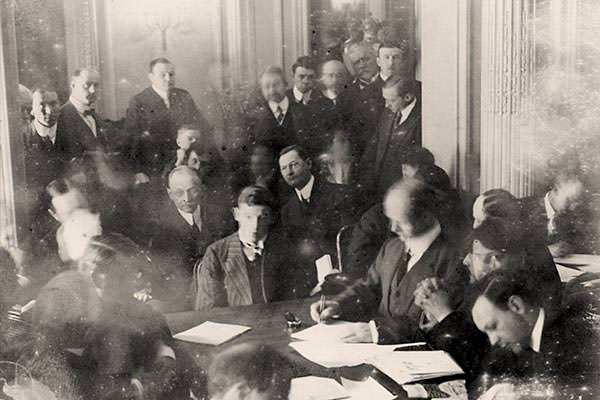 Above: Wireless operator Harold Thomas Coffin being questioned at the US Senate inquiry, held at the Waldorf Astoria Hotel in New York, 29 May 1912.