More than two-thirds of the people on the Titanic lost their lives, still one of the worst peacetime disasters at sea. Read on for some of the key facts about the casualties, or see the list of deaths. 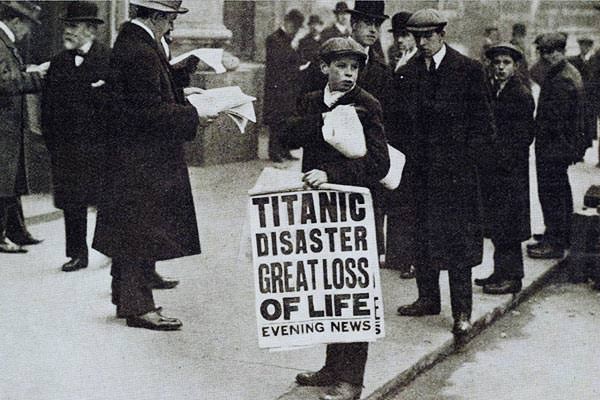 How many people died on the Titanic?

In total there were an estimated 1,517 people killed in the sinking of the Titanic, 832 passengers and 685 crew members.

68% – the percentage of people on board (passengers and crew) who were lost in the disaster.

53.4% – the total percentage who could have survived, given the number of lifeboat spaces available.

The sounds of people drowning are something that I can not describe to you, and neither can anyone else. Its the most dreadful sound and there is a terrible silence that follows it. -Eva Hart, Second Class Survivor (Lifeboat 14)

3,560 – the number of life jackets carried aboard the Titanic.

48 – the number of lifebuoys on board.

832 – the number of passengers who perished.

63% – the percentage of passengers who perished.

39% – the percentage of First Class passengers who perished.

58% – the percentage of Second Class passengers who perished.

76% – the percentage of Third Class passengers who perished.

How many children died on the Titanic?

Of the 107 children travelling on the Titanic, almost half were killed when the ship sank – 50 children in total.

1 – the number of children from First Class who perished.

49 – the number of children from steerage who perished.

685 – the number of crew members who perished.

76% – the percentage of crew members who perished.

To my poor fellow-sufferers: My heart overflows with grief for you all and is laden with sorrow that you are weighed down with this terrible burden that has been thrust upon us. May God be with us and comfort us all. -Eleanor Smith, widow of Captain Smith

724 – the number of crew members who lived in Southampton.

175 – the number of Southampton crew members who survived (in one Southampton school- Northam – around half of the pupils were left fatherless).

Other facts about the Titanic victims

9 – the number of Harland & Wolff employees all of whom perished in the sinking, including Titanic’s designer, Thomas Andrews. All nine were members of a guarantee group, responsible for checking over Titanic during her maiden voyage, fixing any small snags that might occur.

18 – the total number of Harland & Wolff employees who died in some way related to the Titanic; the nine members of the guarantee group, the eight men who lost their lives in the building of the ship, and a shipyard worker fatally injured during the launch.

80% – the percentage of male passengers who perished.

25% – the percentage of female passengers who perished.

I am sorry to say there were more bodies than there was wreckage. -Able Seaman Joseph Scarrot, Survivor (Lifeboat 14), testifying at the British enquiry

3 – the number of dead lifted from the lifeboats.

1 – the number of people rescued who subsequently perished (the victim succumbed the same day); these four victims were buried at sea on the afternoon of the sinking.

333 – the total number of victims bodies recovered from the sea.

Oldest and Youngest Survivors by Class

63 years, 2 months, 9 days – the age of the oldest female victim from first class, Mrs Rosalie Ida Straus. Rosalie was about to escape in Lifeboat 8 when she decided to re-join her husband, Isidor, who had stayed aboard the ship; both perished, and her body was never recovered.

74 years, 10 months, 29 days – the age of the oldest male victim from third class, Mr Johan Svensson, who was also the oldest passenger aboard.

Note: Of the 109 children (aged under 14) aboard the Titanic, 53 perished. All bar one were from steerage class; 52 third class child victims in total.

93 years – the length of time that one family believed the body of their forebear, Titanic stoker William McQuillan, was lying in the depths of the Atlantic. Then, in August 2005, William’s granddaughter Marjorie Wilson was watching a TV documentary with her husband Victor, called ‘Journey To Remember’ (about BBC reporter Mike McKimm’s dive to the wreck). First, Victor spotted the gravestone of a W. McQuillan in footage of Fairview Lawn Cemetery in Halifax, Nova Scotia. Then, when McKimm mentioned William’s age and his Belfast address, the penny dropped. “That’s my Granda”, Marjorie exclaimed.

150 – the number of victims who were buried in Halifax, Nova Scotia, across three different graveyards. The majority of these (121) were laid to rest in Fairview Lawn Cemetery.

4 – the number of lines of gravestones (mostly simple grey stone markers) for the victims of the Titanic buried at Fairview Lawn Cemetery.

Ned Parfett, the young newspaper seller who appeared in one of the most famous pictures related to the Titanic (see top of this page), lost his life just six and a half years later, aged 22, whilst serving with the British army in France during the First World War.

If you have found this account of the Titanic casualties interesting, why not read about the sinking of the ship, find out about the gruesome task of body recovery and see a list of the deaths.

Back to top
We use cookies to ensure that we give you the best experience on our website. If you continue to use this site we will assume that you are happy with it.OK