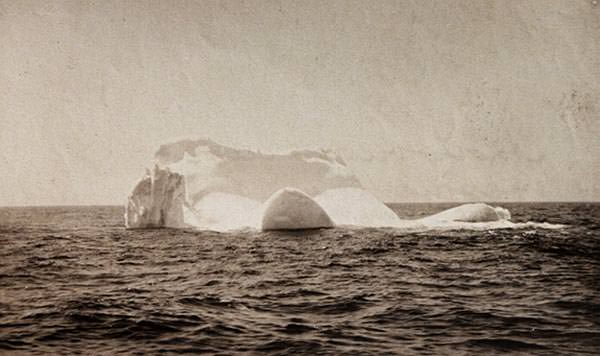 Above: A possible photograph of the iceberg that hit Titanic, photographed from the liner Prinze Adelbertby a few miles south of the disaster scene.

19 – the number of icebergs that third class survivor Charles Dahl later claimed he had seen from lifeboat number 15, during the hours following the sinking. In an interview with the Chicago American newspaper Dahl criticised the speed at which Titanic had been travelling through the icefield, describing how Carpathia had needed to zigzag through bergs whilst collecting survivors.

11:39 pm – the time at which the iceberg Titanic struck was first spotted, too late to avoid a collision (read more on the timeline).

30 seconds – the amount of time from the first sighting of the iceberg to the impact.

50 – 100 feet – the estimated height of the iceberg above water, as recounted by Titanic survivors. 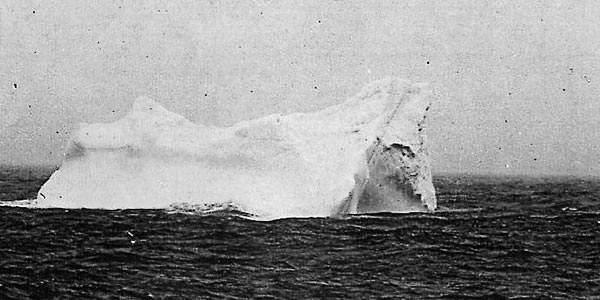 Above: An iceberg photographed by Stephen Rehorek from aboard the MS Bremen, 20 April 1912, and believed to be the iceberg that sank the Titanic.

5 – the number of days after the sinking when Rehorek took his photograph of the iceberg.

85% – the amount of all icebergs in the North Atlantic that originate from the west coast of Greenland.

40,000 – the approximate number of icebergs born each year along the coast of Greenland

According to experts the Ilulissat ice shelf on the west coast of Greenland is now believed to be the most likely place from which the Titanic iceberg originated. At it’s mouth, the seaward ice wall of Ilulissat is around 6 kilometres wide and rises 80 metres above sea level.

1909 – the year in which the Titanic iceberg is believed to have been ‘born’.

1 – 2 – the likely number of icebergs that the Ilulissat ice-shelf would have produced in 1909.

1 – 4% – the proportion of those icebergs that survive to reach shipping waters. They initially float north along Greenland’s west coast before beginning their southward journey past the coastlines of Baffin Island, Labrador and Newfoundland, before passing through the gulf stream into the Atlantic past. Most do not make it this far, either getting caught en route or finally melting in the warm waters of the gulf stream.

1 mile – the likely original length of the Titanic iceberg. The year it would have taken to move along the 40 mile long fjord would have left the iceberg at around a half of its original size. 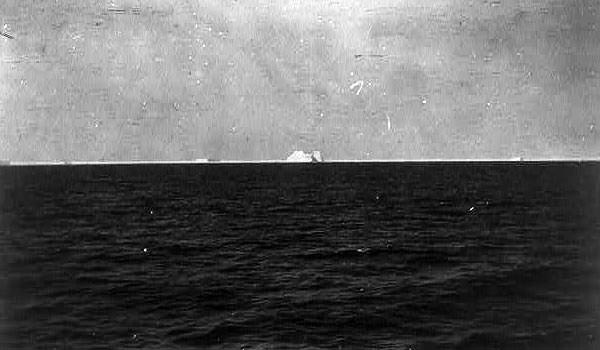 Above: A view of the iceberg believed to be the one the Titanic hit, taken from aboard the Carpathia.

300 – the approximate number of icebergs reaching the shipping lanes of the North Atlantic in April 1912, the largest number for around 50 years. The appearance of icebergs this far south can be highly erratic; for example in 2006 the International Ice Patrol (the monitoring team set up after the Titanic disaster) recorded no icebergs crossing south of latitude 48°N; in 2007 they recorded 324.

1/10th – the amount of an iceberg’s total mass that is typically visible above water.

We do not care anything for the heaviest storms in these big ships. It is fog that we fear. The big icebergs that drift into warmer water melt much more rapidly under water than on the surface, and sometimes a sharp, low reef extending two or three hundred feet beneath the sea is formed. If a vessel should run on one of these reefs half her bottom might be torn away. -Captain Edward John Smith, Commander of Titanic

15,000 years – the approximate age of the first snowflakes that made up the glacier that produced the Titanic iceberg.

2 years – the approximate time that the Titanic iceberg will have taken since its creation to reach the point of collision.

8 miles – the approximate distance the iceberg would have been traveling per day.

Icebergs loomed up and fell astern and we never slackened. It was an anxious time with the Titanic’s fateful experience very close in our minds. There were 700 souls on Carpathia and those lives as well as the survivors of the Titanic herself depended on the sudden turn of the wheel. -Captain Arthur H Rostron, Commander of the Carpathia

14 – the approximate number of days after the collision that the Titanic iceberg would probably have disappeared, melting in the gulf stream’s warmer water.

Back to top
We use cookies to ensure that we give you the best experience on our website. If you continue to use this site we will assume that you are happy with it.OK