Responding to competition from Cunard, whose ships Lusitania and Mauretania were setting new records for speed and new standards of luxury, the White Star Line decided to build three new liners, Olympic, Titanic and Britannic. Rather than compete on speed, this new breed of olympic class ocean liner would be the largest at sea.

Olympic was the first sister ship to be built, replacing the SS Teutonic. Titanic was intended to replace the SS Majestic (although the Majestic recommenced the New York route following the sinking of the Titanic). Finally Britannic, although intended to form part of an impressive trio, would only launch after the Titanic had been lost, and was herself destined to sink also. 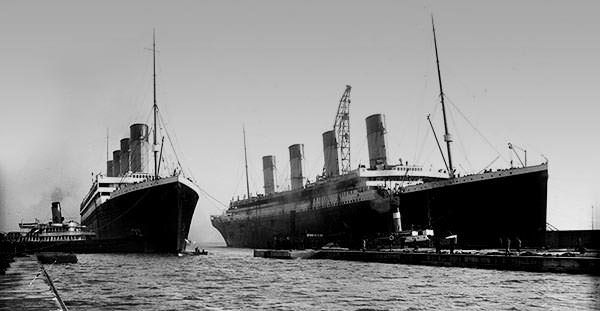 Above: An image of the Titanic sister ship Olympic (left of the picture, with Titanic on the right), taken on 06 March 1912. Photographed by Robert John Welch (1859-1936), the official photographer for the ship-builders Harland and Wolff.

16 December 1908 – the date the keel was laid down and construction commenced.

20 October 1910 – the date Olympic was launched, the first of the trio of White Star Liners comprising Olympic and the sister ships Titanic and Britannic.

22 months – the length of time it took to build the Olympic, from keel to launch.

How Big Was The Olympic?

2 – the number of rockets that were fired at 10:50 am, to signal the imminent launch of the ship.

11.00 am – the time Olympic was launched, accompanied by the firing of another, single rocket.

12.5 knots – the approximate speed that Olympic entered the water.

62 seconds – the time it took Olympic to enter the water, sliding down slipway number 2 on a thick layer of soap and tallow.

20,600 tons – the weight of Olympic’s hull at launch. She was then moored, ready for fitting out, at Alexandria Wharf.

01 April 1911 – the date Olympic entered the Thompson dry dock for final completion. Here her propellers were installed and her hull painted.

27 May 1911 – the date of an open day, where members of the public could board and explore the ship.

5 shillings – the cost of entry for the open day, with all the money raised being donated to local Belfast hospitals.

2 – the number of days over which the sea trials were completed.

31 May 1911 – the date Olympic was handed over to White Star line, in a joint ceremony on the same day as the launch of Titanic.

04:30 pm – the time at which Olympic departed for Liverpool, the same day.

01 June 1911 – the date Olympic arrived in Liverpool, where she would briefly stay before sailing for Southampton, the port from which she would commence her maiden voyage.

14 June 1911 – the date of Olympic’s maiden voyage to New York, also under the command of the future captain of the Titanic, Edward J Smith.

650 tons – the daily coal consumption for the crossing (five single-ended boilers were not used, reducing speed and saving fuel).

2,894 miles – the distance travelled between Daunt’s Rock, near the entrance to Cork Harbour in Ireland, and the Ambrose Channel lightship, New York.

5 days, 16 hours, 42 minutes – the duration of the main Ireland to New York leg (the time calculated between Daunt’s Rock and the Ambrose Channel lightship.

Note: the duration and speed of the crossing, reported consistently for almost a century, have more recently been questioned. Possible errors in calculating the duration between start and finish, which occurred in differing time zones, reflect evidence from Captain Smith that Olympic sailed around 3 hours late. A new calculation, researched and written for the Titanic International Society and published in 2006, propose the following corrections:

5 days, 15 hours, 2 minutes – the revised duration of the journey between Daunt’s Rock and the Ambrose Channel lightship.

21.43 knots – the revised average speed of the crossing.

20 September 1911 – the date on which Olympic was involved in a collision with the cruiser HMS Hawke, and needed to return to the Harland & Wolff shipyard in Belfast, where she was repaired using parts from Titanic, which was then still under construction.

6 weeks – the length of time Olympic was out of action following the collision with HMS Hawke. Olympic’s stern was punctured and the bow of Hawke stove in.

01 September 1915 – the date the British Government requisitioned Olympic for war service as a troopship.

15th May 1934 – the date the Olympic was involved in a collision with a Nantucket lightship.

7 – the number of lives lost in the collision.

12 April 1935 – the date Olympic completed her final voyage, arriving back in Southampton. 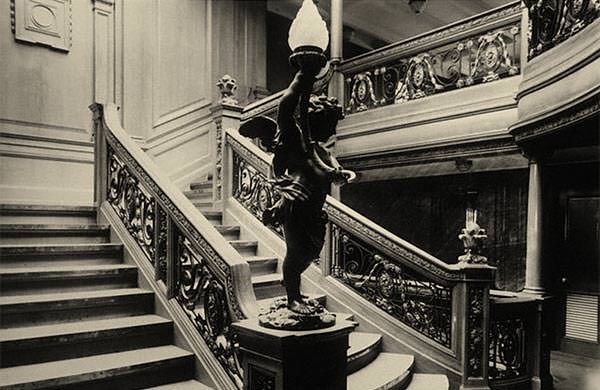 Above: An image of the After Grand Staircase of the Olympic.

24 – the number of years Olympic was in service before being retired.

13 October 1935 – the date the ship arrived at Palmers Yard in Jarrow on the Tyne ready for the superstructure to be broken up.

19 September 1937 – the date the broken remains of the RMS Olympic were towed to Inverkeithing, Scotland to complete her demolition of her hull.

51,680 – the gross tonnage of SS Imperator, the ship that stole the crown of largest ocean liner from Olympic. Built for the Hamburg America Line (otherwise known as the Hamburg Amerikanische Paketfahrt Aktien Gesellschaft, or ‘HAPAG’ for short) she was launched on 23 May 1912. 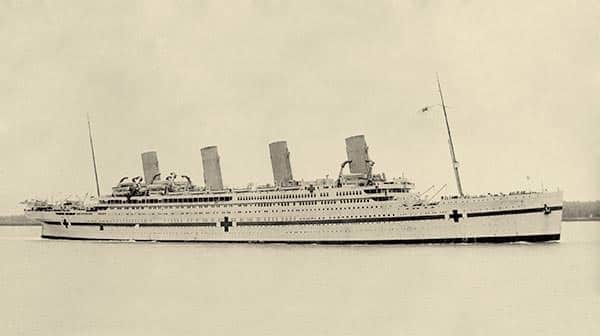 Above: HMHS Britannic in her hospital ship livery.

30 November 1911 – the date Britannic’s keel was laid down and building work begun.

26 February 1914 – the date Britannic was launched, the build taking longer due to the need to redirect labour and materials to the war effort. In addition, following the Titanic disaster time was required to implement safety changes, such as the installation of a double hull along the engine and boiler rooms, and raising six of 15 watertight bulkheads to a higher deck.

27 months – the length of time it took to build the Britannic, from keel to launch.

It was claimed that this ship was due to be named Gigantic, with a change of name being deemed necessary following the loss of the Titanic (a claim that White Star Line and Harland & Wolff always denied).

13 November 1915 – the date that Britannic was requisitioned for use as a hospital ship in the First World War (HMHS is short for His Majesty’s Hospital Ship).

23 December 1915 – the date Britannic entered service as a hospital ship.

How Big Was The Britannic?

12 November 1916 – the date Britannic departed Southampton on what would be her final voyage, returning to the Mediterranean for the sixth time in her service.

Because she was requisitioned for use in the war effort, Britannic would never carry a single fare-paying passenger.

21 November 1916 – the date Britannic struck a mine whilst in the Kea Channel in the Aegean Sea, and subsequently sank, becoming the largest ship lost at sea during the First World War.

08:12 am – the time she hit the mine, rupturing her starboard side.

She took a fearful plunge, her stern rearing hundreds of feet into the air until with a final roar, she disappeared into the depths… -Survivor Violet Jessop, a nurse aboard HMHS Britannic, describing the moment the ship disappeared beneath the surface of the Aegean

48 – the number of lifeboats carried aboard, one of the safety improvements made following the loss of the Titanic.

75 – the capacity of each lifeboat.

3,600 – the maximum capacity of the lifeboats, far more people than the ship was actually capable of carrying. 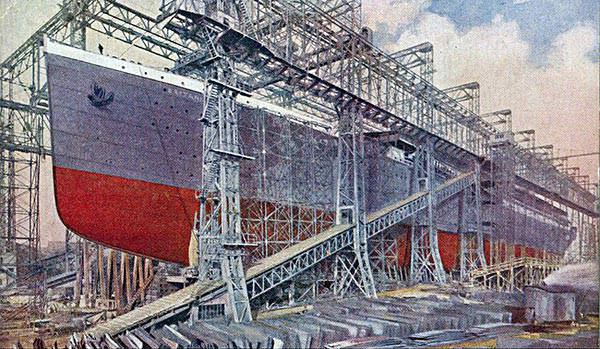 Above: Titanic sister ship Britannic under construction in Belfast, from a contemporary postcard.

5 – the number of dead whose bodies were recovered and given a burial. The other 25 dead were left in the water.

38 – the number of people injured in the disaster (18 crew members and 20 members of the RAMC).

August 1996 – the date on which maritime historian Simon Mills purchased the HMHS Britannic wreck, with an expressed intention to “leave it as it is”.

If you’ve found these facts about the sister ship of the Titanic interesting, why not find out more about the people who built the Titanic and the shipyard where they were built, or read all about the Titanic ship and find out all about ambitious plans to build Titanic 2.