Following her prestigious launch in front of a crowd of around 100,000 spectators and a throng of excited reporters, Titanic began her maiden journey, first collecting the passengers sailing – and even migrating – to America. It was a voyage that would end in disaster amidst the ice-strewn waters of the Atlantic. Read on for a comprehensive summary of the facts about this tragic trip.

Above: Footage of RMS Titanic leaving for her maiden voyage in 1912.

471 miles – the distance of the journey to deliver Titanic from Belfast – the city in which she was built – to Southampton, England – the city from which her maiden voyage would commence.

Where did the Titanic leave from?

Although Titanic initially sailed from Belfast (where she was built) to Southampton, her maiden voyage is considered to have begun in Southampton.

02 April 1912 – the date that Titanic set sail from Belfast to Southampton.

6 – the number of days that the Titanic was at rest in Southampton, before the start of her maiden voyage to New York. 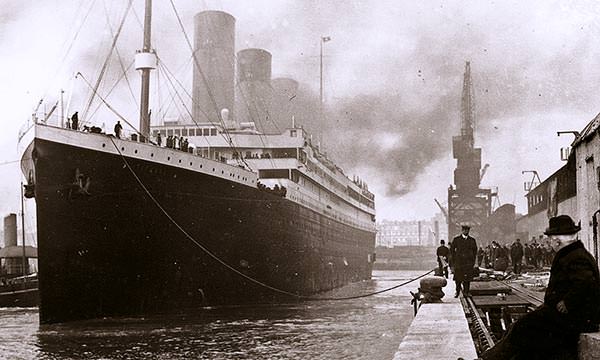 Above: The Titanic at Southampton at the beginning of her maiden voyage.

05 April 1912 – the date Titanic was briefly opened for viewing by the paying public, two days after sailing to Southampton. The ship was “dressed overall”, with flags and pennants hung from the rigging in a salute to the people of the city.

07:30 am – the time Captain Smith arrived on board on the morning of the maiden journey, along with the crew. The officers were already on board, having spent the previous night on the ship.

2 – the number of lifeboats employed in a brief safety drill, conducted at 08:00 am; starboard lifeboats 11 and 12.

Where was Titanic going?

09:30 am – the time the second- and third-class boat trains began to arrive and passengers started to board the Titanic.

11:30 am – the time that the first-class boat train arrived from London.

At the time of her maiden voyage a coal strike was on, and so coal for Titanic had to be scavenged from other company ships.

06 April 1912 – the date that the strike was ended, however there would not be time to deliver enough coal to Southampton docks before Titanic set sail on her maiden voyage.

84 miles – the length of the first leg of the journey, from Southampton to Cherbourg, France.

12.00 pm – the time Titanic cast off from Southampton Dock, towed out into the River Test by tugboats.

4 feet – the margin by which a collision with the USMS New York was averted, when the undertow from the much larger Titanic caused the smaller boat to be sucked toward the ship, snapping the six mooring ropes holding the New York in place.

60 minutes – the approximate time that departure was delayed by this incident, sailing finally resuming at 1pm.

04:00 pm – the time the boat train from Paris arrived in Cherbourg, around 90 minutes before passengers could be ferried out to the delayed Titanic.

22 – the number of cross-channel passengers who disembarked in Cherbourg.

274 – the number of passengers who boarded at Cherbourg.

307 miles – the length of the next stage, from Cherbourg to Queenstown, Ireland.

7 – the number of passengers who disembarked in Ireland.

123 – the number of passengers who boarded at Queenstown (3 first-class, 7 second-class and 113 third-class ticket-holders).

63 – the number of male passengers who boarded in Ireland.

60 – the number of female passengers who came aboard.

2 – the number of tenders that ferried the passengers from Heartbreak Jetty to Titanic; they were named PS Ireland and PS America.

1,385 – the number of bags of mail delivered on board during the Queenstown stop.

01:30 pm – the time Titanic raised anchor and set sail on her first and last transatlantic crossing.

2,825 miles – the intended distance of the longest leg of the voyage, from Queenstown to New York, USA.

How many people boarded the Titanic?

116 – the typical number of hours taken to cover the same distance by the Titanic’s rivals, the Cunard liners Lusitania and Mauritania (the idea that the Titanic captain ignored the iceberg warnings because he was trying to set a new time record is just one of the many Titanic myths that endures).

Above: The route of the voyage of the Titanic and the location of her sinking.

4 – days into the crossing when the collision with the iceberg occurred.

How much were Titanic ticket prices?

3 – the intended number of legs planned for Titanic’s return voyage (New York to Plymouth to Cherbourg to Southampton).

As she set sail on her maiden voyage, some interior work was still to be completed. For example, some areas of the ship were without heating, whilst others were too hot. A team of nine Harland & Wolff employees, including the ship’s designer, Thomas Andrews, sailed as members of a guarantee group, tasked with ensuring any problems were attended to. All died in the sinking.