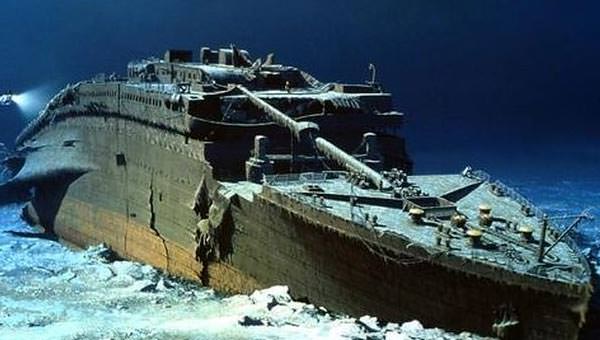 Above: The wreckage of the Titanic lying in the deep Atlantic (Image credit: NOAA)

2.4 miles – the approximate depth at which the wreck of the Titanic lays.

3,840 metres – the approximate depth in metres.

It is a quiet and peaceful and fitting place for the remains of this greatest of sea tragedies to rest. May it forever remain that way and may God bless these found souls. -Robert Ballard, Woods Hole Oceanographic Institution, September 1985

400 – the water pressure, measured in atmospheres, at the depth where Titanic rests.

5-10 minutes – the approximate time it took the Titanic to reach the ocean floor.

56 km/h – the approximate speed (35 mph) that the bow section travelled to the sea floor.

60 feet – the depth that the bow reaches beneath the ocean floor (18 metres).

40 feet – the amount of the bow that sits above the surface of the sea bottom (12 metres).

80 km/h – the approximate speed (50 mph) that the stern section travelled on its way down.

Unlike the relatively smooth descent of the streamlined bow, the stern spiralled down, sections breaking off as it went, and was still twisting as it collided with the sea floor. This is why the stern is so much more damaged and distorted than the bow.

Now you know how deep the water is where the Titanic sank why not discover where the ship sank and when she sank, or read facts about the shipwreck.